We have instock the New Silver Back Dye DAM, and what a peice of kit it is, only a handful (250) have been made worldwide they are very limited edition we are really lucky to get one instock instock.  I played with a Dye DAM at our mag fed game a couple of weeks back and its like no other gun.   You can shoot first strike and normal paintballs at the flick of a swtich flick between your loader and your Mags fill up your mags with first strike and shoot with deadly accuaracy at far far longer range.

This Christmas show your other half you truley love them and treat them to a Silverback, can a lame penguin take out a man at 100 yards with deadly accuracy hell no he needs a DAM this christmas.

Check out the vidoe by our good friend and paintbaling Legend Mr U. Want a Christmas party with a difference?  Mayhem Paintball has unique package deals available for Christmas parties of any size.  Paintball is a great day's activity of excitement, adventure and is a great motivator of team spirit that will give the whole office something to laugh about for years to come.  All-inclusive package deals are available from just £27.99 per person for a full or half days play, and we can tailor make your day to your companies needs.  Mayhem boasts: We hope you enjoy

On Thursday the 30th of October, during half term, Mayhem Paintball will be hosting a Walking Dead themed scenario day!

Expect games based on the epic TV series, so be prepared to attack rival groups compounds, be in a constant battle for resources and of course, survive the Zombie Hoard!

Groups of any size are welcome, as we have lots of small groups who you can mix in with, and players of all ages and abilities are welcome.

We'll be playing games across a variety of our different playing areas with real tanks, helicopters, planes and much, much more.

If you book before the 22nd of October, you'll receive an additional £4 of our pre-pay packages! USE PROMO CODE: 'WALKINGDEAD' at the checkout to get £4 off!

Please book your place at www.mayhem-paintball.co.uk/book

At the October paintball walk-on day, one of our regular players, Simon, brought along his shiny new quadcopter and filmed footage from the games we played on our COD map Bog and Speedball playing areas.  This was only Simon's first attempt at filming paintball games using one of these drones and you can see his confidence increase during the filming!

A huge thank you to Simon for coming down to film, and allowing us to use the footage!

Embed This Image On Your Site!

Dave has taken on the Ice Bucket Challenge and nominated Ged from NPF Bassetts Pole, Jim from Warped and Robbo from P8ntballer to take on the challenge of having an ice cold bucket of water poured over their head!  Here's Dave's effort.  It looked cold! 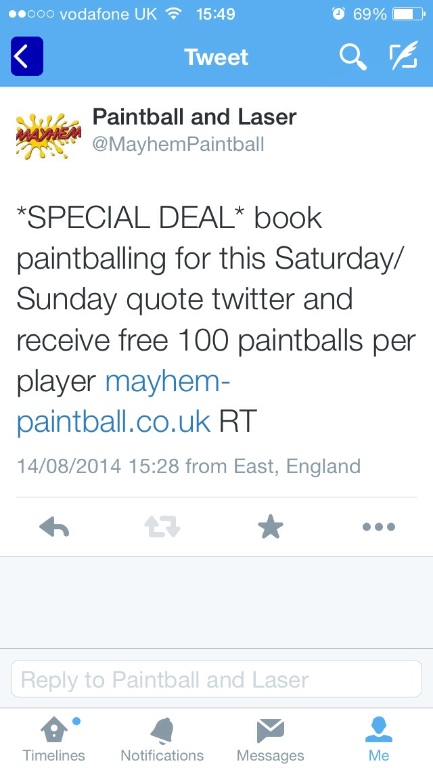 Check out out our new twitter deal for this weekend the 16th & 17th.

Give us a call in the office to book and quote  twitter  deal you will receive  an extra 100 paintballs per player !

Planet eclise realise the new Geo 3.5, made in Engalnd and desgined by Jack Woods Planet eclipse are the company for high end guns these days.  Most of the top team in the world shoot Geos or Egos so whats new this time ?